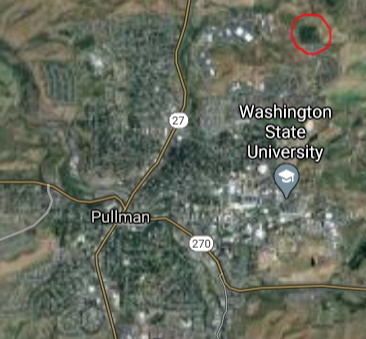 October 2. Yesterday I ate five grams of Psilocybe cubensis and went to a patch of ancient woods at the edge of town. It's called Magpie Forest. Here's a photo I took. The trees are mostly hawthorn, wiry and gnarled. We used to walk across the wheat fields to get there. Now the apartment district has expanded right to the edge of it, and WSU has bought the property as a nature preserve.

I'm not going to drive on mushrooms, so I had to ride my bike there, and the first thing I noticed was how far uphill it is. For almost half an hour, I was mostly climbing, sometimes so steep that I had to get off and walk.

When I got there, the drugs were taking effect, and I locked my bike to a tree and went down a little-used footpath, and then up a wildlife trail aiming for the center. It got too dense, and there were ants, so I backed up, and borrowed a bed from a deer to ride out the launch.

I have a thick head against mushrooms. The trip's plateau, even after I smoked weed on top, was hardly trippy, and I was disappointed to not see crystalline geometry in the branches, or sense the personalities of individual trees, like I did on my last trip.

But I did get a sense of the vibe of the forest. Compared to river trees, hill trees are hostile and suspicious. But they really know how to have fun. If you could get outside of time, you'd see them dancing in the meadows.

I found some cool places, including a patch of bare dirt, made by a large bird for dust baths, before a great thistle luminous in the sun. It felt like a temple, and I scattered some catnip seeds I brought from the river trail.

The biggest insight I got, was after a few hours in the woods, coming to the edge and looking down on the human-made world. It didn't strike me as evil, or ugly, but unreal. These strange animals, with their clickety-clack machinery, have taken the bounty of the earth and used it to go ever deeper inside their own insane constructions, and they don't even like it. It's anyone's guess how long they can keep going.


October 7. We Learn Faster When We Aren't Told What Choices to Make, and we also learn faster when our choices have consequences. It seems like both of these are increasingly missing. More than our ancestors, we're told what to do all day, and we don't see how it matters what we do. "This insight could also help explain delusional thinking, in which false beliefs remain impenetrable to contrary evidence. An outsize feeling of control may contribute to an unflagging adherence to an erroneous belief."

Or, human society has become so constricted and insulated, that our only opportunity to make real choices and see real feedback, is to make clearly wrong choices.


October 9. Today I want to make a reality-based case for Donald Trump. But first, the anti-reality case: that Trump is a man of high character, a skilled entrepreneur, who has come to Washington to clean up corruption.

The reality is just the opposite. He's probably the most immoral president since Andrew Jackson; if he'd taken the money he got from his dad and just put it in normal hands-off investments, he would have more money than he has now, so he's not even a good businessman; and more than any recent president, he uses the office to serve his friends ahead of serving the whole, which is the definition of corruption.

If Trump is really an enemy of the super-rich, why hasn't he called for mass cancellation of debts? He himself has huge debts, and he's had them cancelled many times in the past by declaring bankruptcy. Debt cancellation was a big part of ancient agrarian cultures, whose patriarchal and xenophobic values still echo through the Republican party. Trump won't do it, because he's an authoritarian, who believes it's good and right to leverage power over others into greater and more secure power.

The reality-based case for Trump is to accept all this, but flip its meaning, by supposing that he is serving America, not on the level of politics, but on the level of psychology. In that case, the worse he is, the better he is.

You have to admit, Trump has made America more alive. He's made us less comfortable, and more alert. CNN goes on about his lies, and they're not wrong, but what they're missing is how much hidden stuff he has brought into the open, especially the mental weaknesses of his followers, and the structural weaknesses of our democracy.

Trump did everything he could to help COVID-19, because the harder the virus hits us, the more we have to learn to be adaptable -- which we need to learn, because our civilization is collapsing.

Trump is a controlled burn of a system with too much dead wood. He's a vaccine to strengthen us against future dictators. He's a shaman who has exposed our poor reality creation hygeine. He's an auditor who came in to see how much bad shit he could get away with, and it's way too much. If you get mad at him, you've missed the point. Trump is the big bad wolf, who blew down our house of straw, and now we'll have to build a house of sticks.


October 12. A preview of the coming tech crash, a Hacker News thread, Ferrari is bricked during upgrade due to no mobile reception while underground. Basically, the car has a built-in thing that can disable it, but the thing to un-disable it is not built in, but requires a fully functioning technological civilization. So, if products that are easier to brick than unbrick reach a critical mass, then a single breakdown can cascade to brick them all.


October 16. This subreddit post quotes Noam Chomsky on human intelligence as a lethal mutation. It's true: the key genetic difference between us and chimps is that we have a gene that makes way more neurons in the neocortex, and our brainpower has led us to do terrible things.

I'm not interested in human extinction, because I see it as a less interesting subset of human transformation: the most likely way we'll go extinct is to change ourselves into something that seems better, but it turns out to be much less robust.

The top comment in that thread, by Voidgenesis, speculates that we're now getting ready for a change as big as the change from Neanderthals to modern humans, or from hunter-gatherers to farmers, "though which group of humans does something crazy and succeeds is anyone's guess."

Voidgenesis thinks we're moving toward hypersocialization, like how honey bees shifted from being solitary to living in hives. An argument for that prediction would be that recent cultural changes are away from tribalism and toward universal brotherhood. I wonder if we're just shifting from vertical to horizontal tribalism. It's like, when I was in middle school, there was a clear hierarchy of cliques. In high school, all those groups were still there, but they lived in peace, and every group thought they were the best.

But you could argue that we're becoming less social. First, the internet has already impoverished our deep and close connections, and our shallow and distant connections are unsatisfying and fragile. Now COVID-19 has separated us even more, with large gatherings basically illegal. There's never been a better time to be an introvert.

Meanwhile, under identity politics, you have the right to identify as almost anything, and not have it held against you. This includes identities that didn't exist before, so inevitably we'll have a larger number of smaller tribes, even tribes of one.

And what's up with autism? I think "the autism spectrum" is a bunch of different things, but one of them could be the leading edge of a biological shift to a new kind of human. A classic sci-fi novel on "homo superior" is Odd John by Olaf Stapledon.

I could be wrong about any of these things. The hardest part of forecasting metamorphosis, is knowing what's the butterfly, and what's the cocoon. For a more human-like metaphor, I'd go with Tolkien: we were orcs, and we're trying to become elves.

So what are elves like? They're long-lived, slow-paced, contemplative, and culturally complex. They have high tech but it's subtle and modest, like super-light ropes and super-nutritious food. Elves would not have freeways or Facebook, but they would have lots of little workshops doing cool stuff. And they would have rules to prevent technology from degrading quality of life. Right now we're at the stage of trying absolutely everything to see what happens. So I imagine, after the next tech crash, we'll at least know about a few things to avoid.

The spirit of technology is ultimately anti-consumerist, because the spirit of technology says, "Let's make things cheaply, that last a long time, that are easily repaired, and that make the major tasks of surviving less hard." And it's obvious to me that we're already arriving at this point with technologies around water and electricity. Decentralized food-growing tech is only slightly behind.

On my better days, I truly believe that if humans have basic necessities taken care of, then it's only a sick culture that can distort our innate curiosity and sociality into a madness for wealth and (illusory) independence.